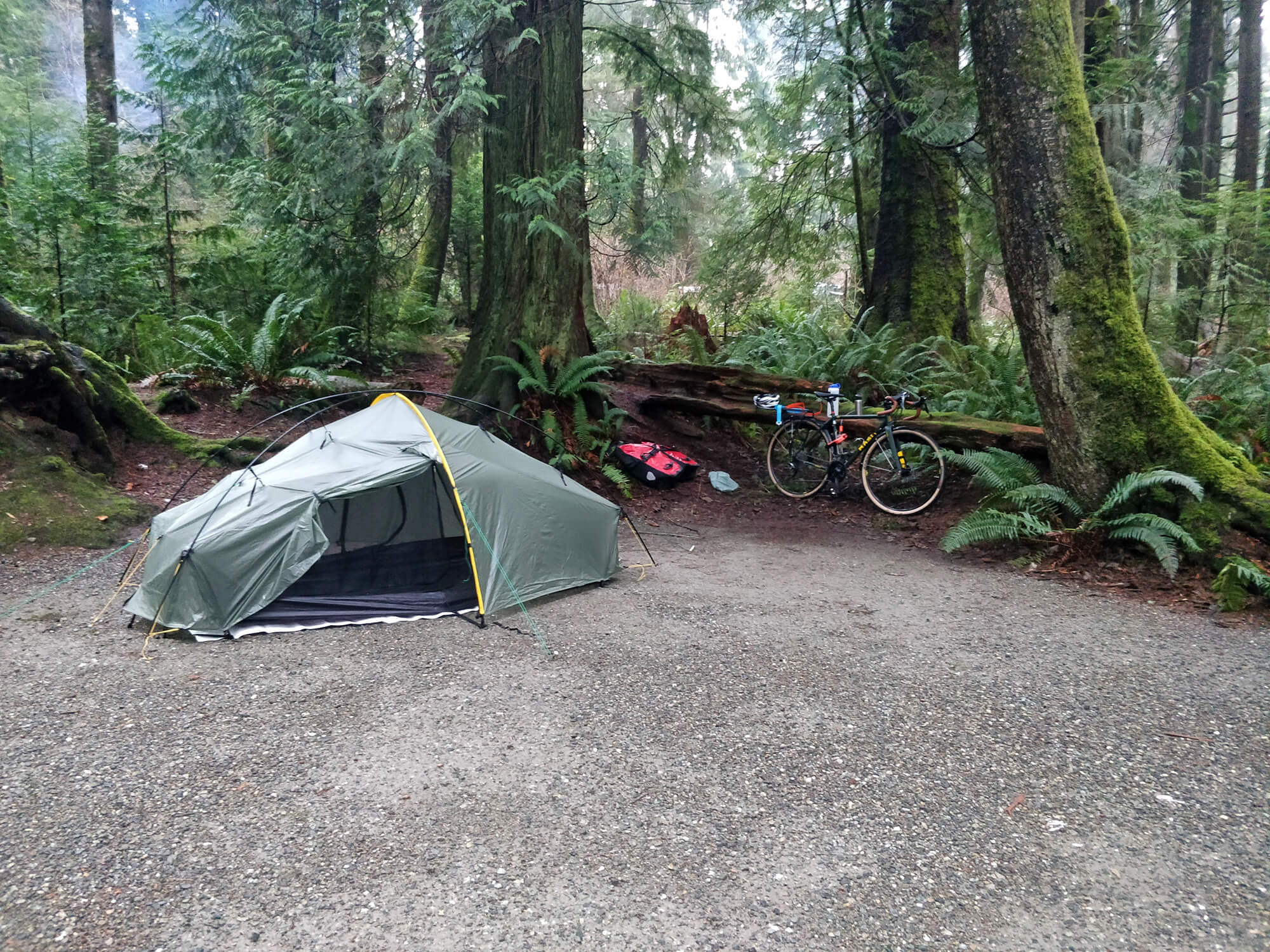 It was evident that I was yearning for adventure when I moved to Langley for my internship in September. While I was there, I progressively started accumulating pieces of gear hoping they would bring some reality to my adventurous aspirations. I bought a tent, then a gravel bike, a water filter next. I was eager to get out and put everything to use. Aside from justifying the money that I’d spent, I wanted to prove to myself that I was actually capable of sleeping out somewhere alone with only a few layers of fabric between me and the cold, rain, and wild animals.

During my time in Langley, I got out on several enjoyable day-trips into Golden Ears Park and made it up to the Seymour Dam. I planned bike camping trips for several weekends in October, and November, too, but I never actually made it out the door for an overnighter. There were always too many things to do on the weekend. The weather always seemed to pose too great a risk of biking out, getting too cold and wet during the night, and not being able to warm back up. The idea of waking up on a cold morning and needing to crawl out of my warm sleeping bag to put on wet clothes that hadn’t dried through the night wasn’t that appealing. Never being more than a day’s ride from the comfort of a hot shower and soft bed was not enough of an incentive either.

When I decided to return to Victoria for a spring work term at my university, a week around christmas break freed up. I was on vacation, so all of the excuses about not having enough time were no longer relevant, and the rain was supposed to hold on over the coming Monday and Tuesday.

I considered doing the “Cowichan 8”, a well-planned and documented bikepacking route, here, on lower Vancouver Island, but the highway webcams showed too much snow on parts of the route. I also thought about biking to Montague Harbor Marine Provincial Park, a campground on Galiano island that is open through the winter, but I wondered whether biking onto a ferry to go camping qualified as essential travel during the second wave of COVID. Then, a friend suggested French Beach, which seemed like a good idea. The beaches along Vancouver Island’s Juan de Fuca strait are beautiful and I thoroughly enjoyed wandering them when I hiked the Juan de Fuca trail the previous summer. So, I planned a route. Tanking the Galloping Goose Trail out of Victoria, I’d wait for the last opportunity to transition to riding on the shoulder of Sooke Road highway. 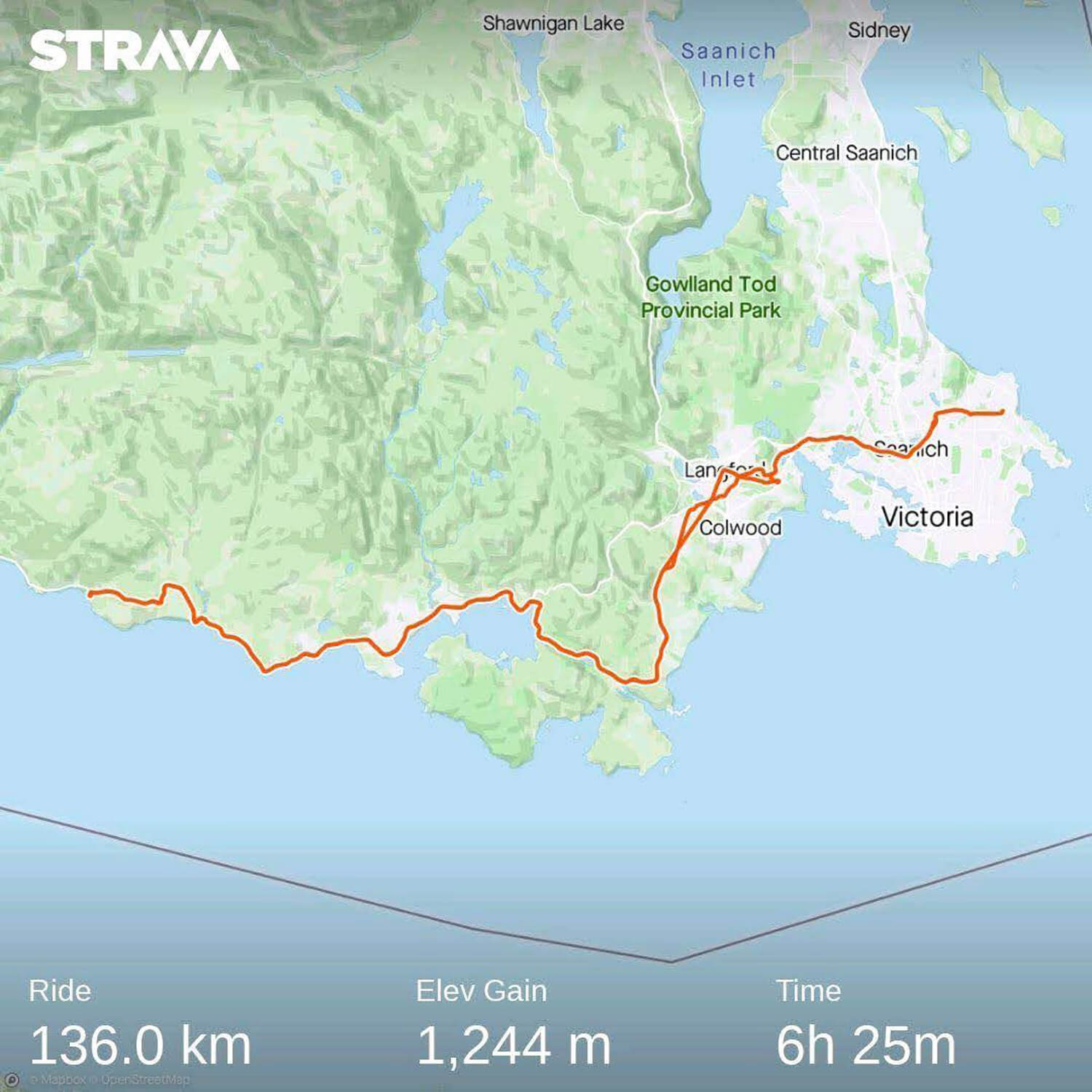 On Monday morning, I took my food out of the fridge and packed it in my pannier bags along with my sleeping bag and everything else I’d laid out the night before. It took me a while to get everything situated on my bike in a way that I considered to be acceptable. The last thing I did to reassure myself that I was ready before leaving the house was to check that the Spot phone I’d gotten for Christmas was working.

As I rode towards the Galloping Goose Trail, I adjusted to the weight I was carrying on the back of my bike. I glanced up periodically trying to evaluate whether the sky promised what had been forecasted. Turning west, and passing through Langford, I saw a few familiar faces. After waving and exchanging pleasantries, I left them proclaiming I was pedaling out to French Beach. I passed another cyclist with four pannier bags and wondered if she’d made similar plans.

Beyond Langford, riding was unfamiliar to me but pleasant. My wheels turned smoothly over the wide gravel path that was once a rail bed for freight trains during the First World War. I stopped for lunch before turning onto the highway. And after lunch, I paid for the hills I’d managed to avoid on “the Goose”. Up and down through Saseenos, Milnes Landing, and on to Sooke. Then the road narrowed. The white lines on either side that had separated me from the cars that swooshed by were trimmed off by the slimming pavement. The hills continued with the addition of vans with surfboards strapped to their roofs, passing on their way to find the next best swell. After pedaling continuously for one-and-a-half hours since lunch along the winding coastal highway, I finally stopped in Shirley to top up my water before my last descent to the French Beach turnoff. 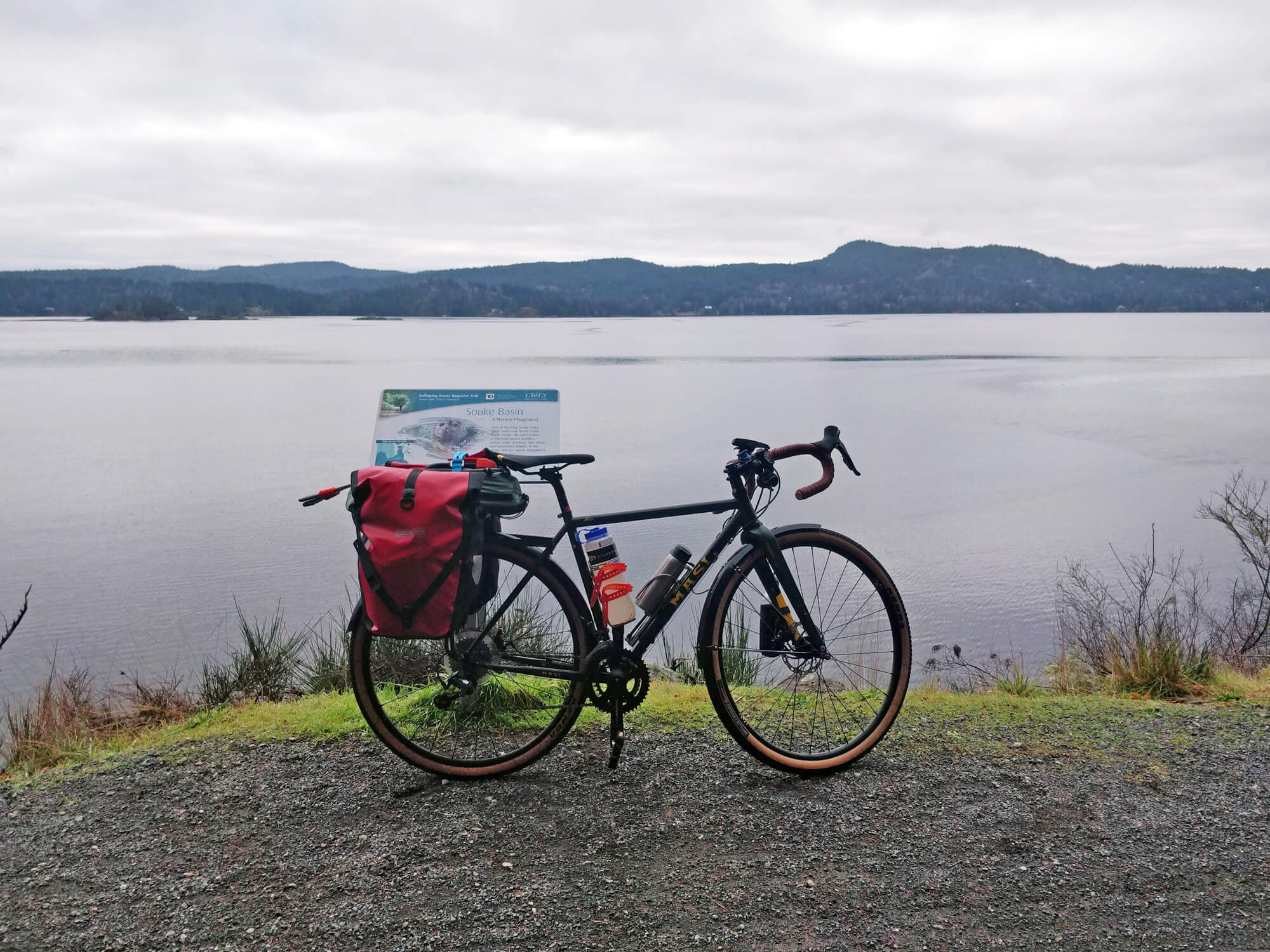 When I arrived I did a few laps of the campground’s main road trying to discern which site would provide the best front yard for the night. When I finally settled on one, I leaned my bike against the picnic bench and accounted for everything as I removed it from the panniers. Keeping an eye on my watch, I set up camp and made something warm to eat before the daylight faded completely. There wasn’t much to do in the dark, so I walked around the campground envious of my neighbors’ campfires. I saw the cycle tourist who I’d passed earlier and asked her if she was just staying the night. She’d made the same plans as I had. I continued down to the water, then back to my campsite, and decided, even though it was only 7:00, that I was tired enough to go to bed.

I was wrong. Two hours later I was awake with enough energy to match the miles I’d ridden earlier in the day.  I decided to crawl out of my tent to walk back down to the beach which was now illuminated by the full moon. The clouds from earlier in the day had parted enough to show off the stars above the mountains in Olympic National Park across the water to the south. It was a view I’d missed. On the beach, I saw the silhouette of another person and, after making sure it was her, started a conversation with the other bike tourist spending the night there. She explained that she and her partner had started bike touring in France a few years earlier and that she’d been exploring new ways to get outside, not having a car during the pandemic. 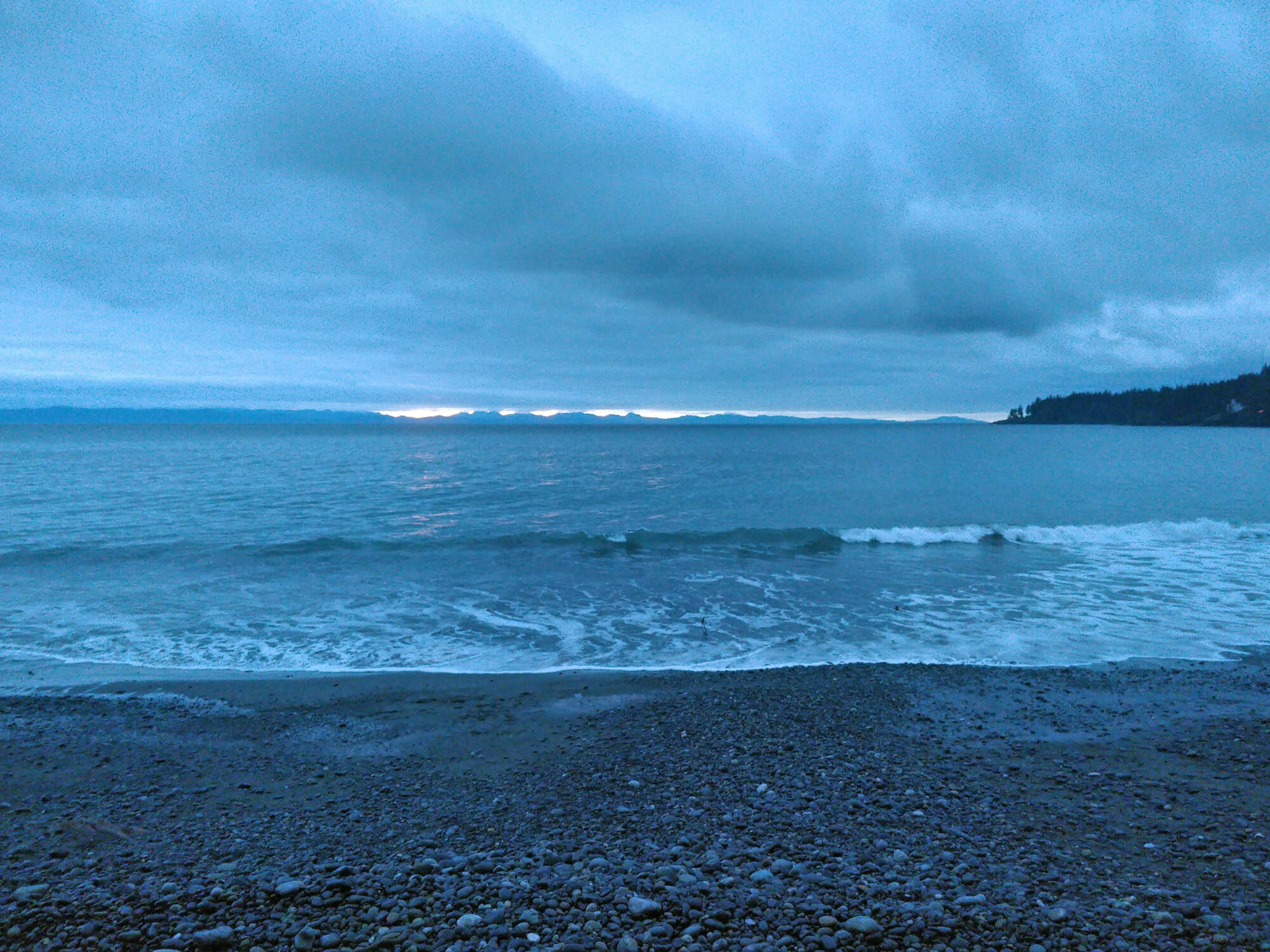 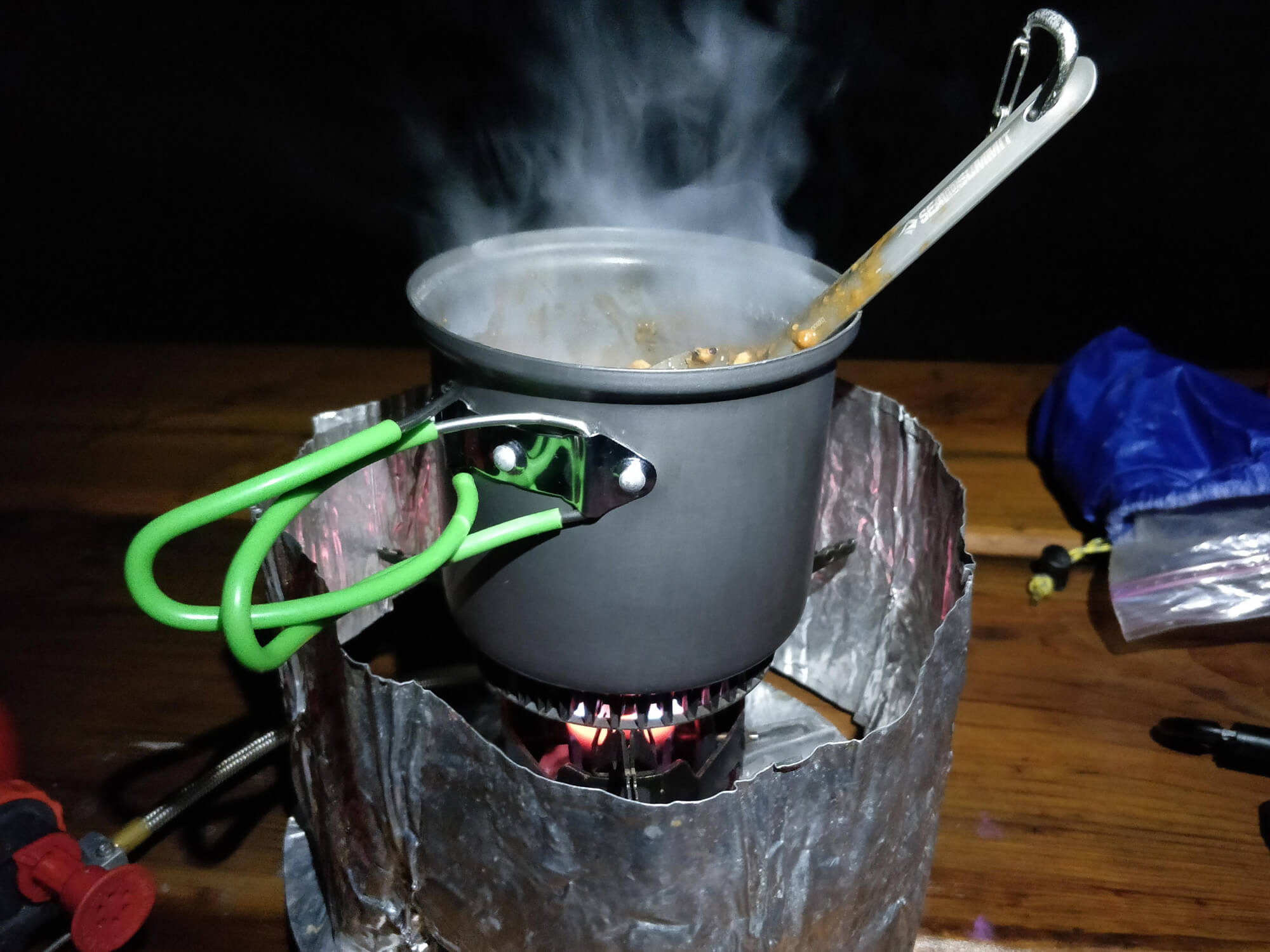 I slept well after enjoying the night sky and swiftly packed up camp the next morning after breakfast. Motivated by the prospect of professionally brewed coffee, I peddled up the hill away from French Beach and stopped at Shirley Delicious. Warmed and energized by my coffee, I began my journey back to Victoria much of which was similar to the previous day: commuting surfers, hills, gravel, lunch, Galloping Goose, and finally home.

Although the sky only cleared up overnight, and I didn’t have a traditional campfire with good company, my first solo bike touring adventure was very pleasant. I didn’t get too cold or too wet during the night, no wild animals were appetized by my presence on their beach, and I didn’t have a pile of work waiting for me when I returned. Most of the route was excellent for biking, save the narrow highway between Sooke and the French Beach turn-off. The journey served its purpose of allowing me to test my gear and prove that I could survive a night out of the house alone—but perhaps most importantly, it got me excited for more bike adventures to come. 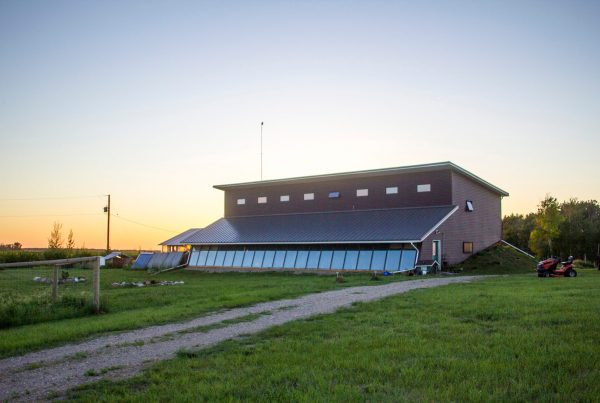